Matt and the Warrior Games

Matthew Aspinall joined the forces when he was 16 and served just short of 11 years - years that included postings to Germany, two tours of Iraq, and a stint in Cyprus supporting soldiers coming back from Afghanistan.  Matt suffered post-traumatic stress disorder, a problem only diagnosed in 2014 after the murder of soldier Lee Rigby elevated symptoms he’d been experiencing (poor sleep, nightmares, reliance on alcohol, aggression and massive anxiety) and forced his partner to ask the doctors for help. 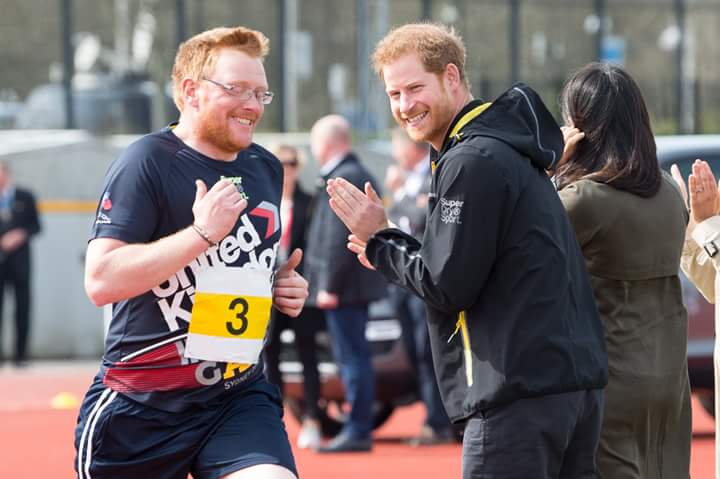 Matt has always been a sportsman. He cycled, ran and competed in Nordic Skiing when he was serving in the forces and he’s now back in the game and has been training for some months for a place in this year’s Invictus Games in Sydney (the word ‘invictus’ meaning ‘unconquered’), the event that harnesses the power of sport to inspire recovery, support and rehabilitation of injured servicemen and women.

In the run up to this Spring’s trials for Invictus, we asked Matt to share his journey back into sport and a healthier life and his ambitions for the future. After the trails Matt was invited to take part in this summer’s Warrior Games in Colorado Springs in the US, a nine day event hosted by the Air Force and involving about 300 wounded, ill and injured service members and veterans Enjoy and be inspired…

Rediscovering the power of sport

In November last year I was glued to the Invictus Games in Toronto. After London (2014) I was inspired, but didn’t think I could enter, and when I was given the paperwork to enter the USA Invictus Games (2016) I couldn’t bring myself to fill in the simple form. I felt it would all be too much. But after last year’s Toronto Games I decided to apply and was invited to a sports festival last year - in November 2017 - to try some of the sports and meet some Invictus Athletes. Everyone was so welcoming and I felt at home again with my brothers and sisters from the forces. It became clear that these Games aren’t about how fast or strong you are but about passion and commitment. It’s not just about getting a place, or even getting on the podium. It’s about a bigger journey and steps towards a bigger goal.

My first step was an ambition to do a triathlon, but swimming has always been my weakest sport. The team suggested I give it a go so my name went down. I also signed up for indoor rowing thinking it would be a fantastic way of cross training. The journey had begun.

At the training camp I was, on day two, taken to the pool, our coach Emily kicking off by taking us through some stretches. I hadn’t done this for a while so was quite inflexible. When we finally got into the water I took the lane nearest the wall, the slow lane. As I said before, I’m not the strongest or fastest swimmer. We did a warm up of 200 meters, taking a moment to rest after each 25m stretch. By the time I’d finished eight lengths I was ready to get out and leave. But with loads of encouragement from the coaches I stayed in the water, and they adapted the session so instead of swimming 3 x 200 meters with a 30 second rest, I swam 2 x 100 m. In the afternoon I broke my own record swimming 2km. And when we got out and Emily took us through the stretches again, the only question was what time (5am it turned out) we’d need to be back poolside in the morning.

The next morning at that training camp we were all aching, realising how weak we’d become. Even the stronger swimmers were feeling it. Emily wanted a 400m warm up but (rather kindly) told me to stick to 200m. Then we did some drills and skills, practising the correct technique for breaststroke and front crawl. I’ve never had lessons before and it felt good. By the afternoon we were on to tumble turns, and I was tumble turning - not quite like a pro but practising whenever I reached the end of the pool.

By day four we’d added rowing into the schedule, learning and practising my technique on indoor rowing machines. There were lots of new faces in the room, but I knew I had to focus, to take the training in. Within minutes I realised rowing machines are one of the most overlooked pieces of kit in any gym. Not that it is easy. In fact my body was so tired by the days in the pool I found it difficult to row for any length of time. They wanted to see how far we could go in four minutes and then in 60 seconds. I rowed 994m in four mins, and then 284m in 60 seconds.

Back on the bike…

They let us rest after the swimming and rowing, but the next day - feeling fresh and ready and after another load of introductions, including to our cycling coach Keith - we were off on our bikes, practising fast starts and group riding, starting with a normal peloton (the kind you see on the Tour de France) which involves the first riders - who are exposed to more resistance and so fatigue - dropping off to the rear in turn, so the group is fluid, riders pushing from the back to the front then falling away. It’s not easy and I did come off and buckle my wheel (and dent my pride) but me and the bike were okay, and there was a spare one ready so after a quick change I carried on riding…

Back in Hereford and Halo

When the training event was over, all that was left was to reflect on what had been a surreal experience, to rest (I was exhausted) and to get my bike ship shape for some home-based training. I went to Specsavers to update my cycling glasses and swimming goggles prescription and - after finding out more about my Invictus journey and ambitions - the manager offered me replacements for free. I got more support, too, from Halo Leisure who have offered me a full access free membership to support my training, part of their bigger ambitions to support people back from ill health.

As well as regular gym workouts in Halo centres in Hereford, including sessions on the rowing machine to practise my technique, I have taken to Spinning which is indoor cycling on a static bike. I know the instructors at the spin class and they know what I’m training for and test my endurance and speed at every session (at least three a week). As the weather’s improved I’ve been road cycling, too, and the power is returning. And as the Games get closer I’m back in the pool... I’ve gone from being a swimmer who needed to take a break after 25m, to being a swimmer who can do a straight 100m before stopping for breath.

A murder in Hereford city centre - much publicised in the media - set me back. Suddenly I was recalling my days in the service and all I’d experienced and was unable to leave the house. On good days I’d get to The Cart Shed - a charity in North Herefordshire that offers a calm, caring environment to promote acceptance of difficult times and offering training in new skills using traditional tools. It was, in fact, one February morning in Hereford when I was setting out to meet the charity team that I received an email from the Invictus team, asking me to join a swim camp. I surprised myself when I told them I was on my way. And when I arrived I found myself chatting to people from the first camp, found myself thinking that this was more like normal life - feeling at ease and feeling glad I was here with them. Back in the pool we were given a 200m warm up, practised skills and drills, dives and fast swimming. And after that more banter with the lads and a sense I didn’t want to leave, and I was never going to give up.